Here are some of the Xen Project hypervisor’s key features:

This page will explore the key aspects of the Xen Project architecture that a user needs to understsand in order to make the best choices.

Below is a diagram of the Xen Project architecture. The Xen Project hypervisor runs directly on the hardware and is responsible for handling CPU, Memory, timers and interrupts. It is the first program running after exiting the bootloader. On top of the hypervisor run a number of virtual machines. A running instance of a virtual machine is called a domain or guest. A special domain, called domain 0 contains the drivers for all the devices in the system. Domain 0 also contains a control stack and other system services to manage a Xen based system. Note that through Dom0 Disaggregation it is possible to run some of these services and device drivers in a dedicated VM: this is however not the normal system set-up. 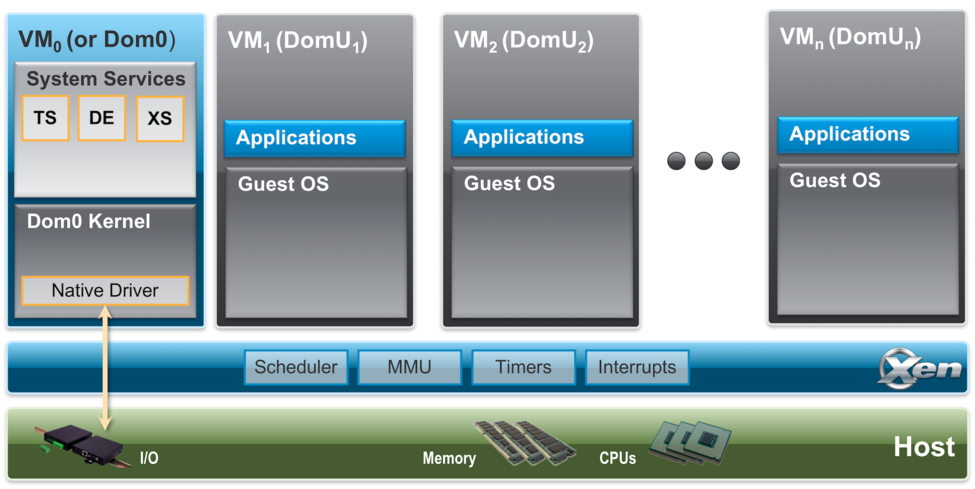 The following diagrams show how guest types have evolved for Xen. 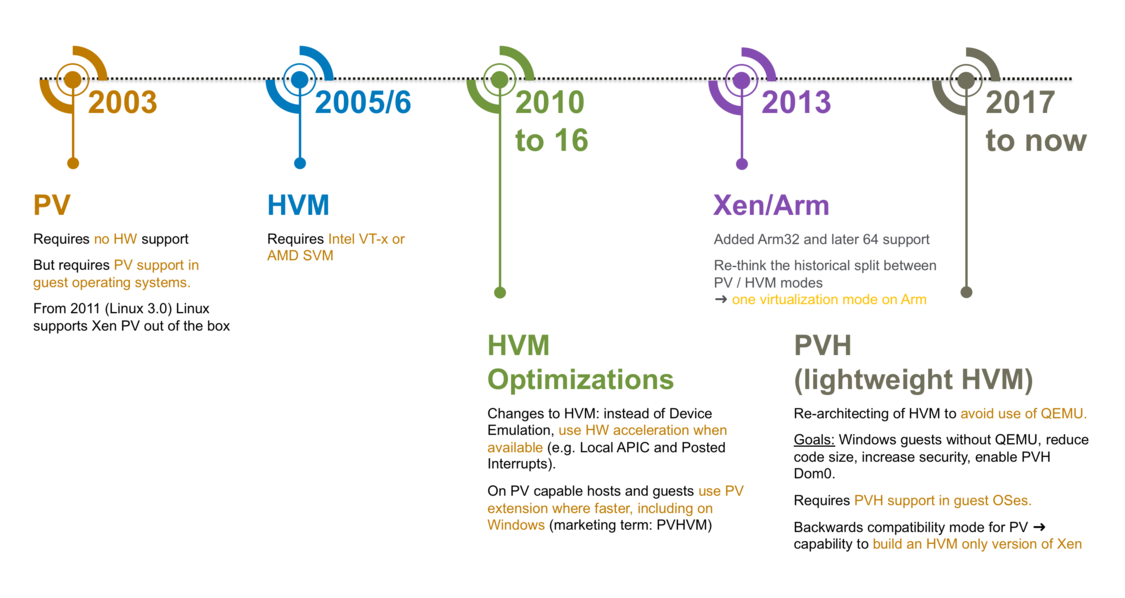 On ARM hosts, there is only one guest type, while on x86 hosts the hypervisor supports the following three types of guests:

Paravirtualization (PV) is a virtualization technique originally introduced by Xen Project, later adopted by other virtualization platforms. PV does not require virtualization extensions from the host CPU and is thus ideally suited to run on older Hardware. However, paravirtualized guests require a PV-enabled kernel and PV drivers, so the guests are aware of the hypervisor and can run efficiently without emulation or virtual emulated hardware. PV-enabled kernels exist for Linux, NetBSD and FreeBSD. Linux kernels have been PV-enabled from 2.6.24 using the Linux pvops framework. In practice this means that PV will work with most Linux distributions (with the exception of very old versions of distros).

To address this, the Xen Project community has upstreamed PV drivers and interfaces to Linux and other open source operating systems. On operating systems with Xen Support, these drivers and software interfaces will be automatically used when you select the HVM virtualization mode. On Windows this requires that appropriate PV drivers are installed. You can find more information at

HVM mode, even with PV drivers, has a number of things that are unnecessarily inefficient. One example are the interrupt controllers: HVM mode provides the guest kernel with emulated interrupt controllers (APICs and IOAPICs). Each instruction that interacts with the APIC requires a call into Xen and a software instruction decode; and each interrupt delivered requires several of these emulations. Many of the paravirtualized interfaces for interrupts, timers, and so on are available for guests running in HVM mode: when available in the guest — which is true in most modern versions of Linux, *BSD and Windows — HVM will use these interfaces. This includes Viridian (i.e. Hyper-V) enlightenments which ensure that Windows guests are aware they are virtualized, which speeds up Windows workloads running on Xen.

When HVM improvements were introduced, we used marketing labels to describe HVM improvements. This seemed like a good strategy at the time, but has since created confusion amongst users. For example, we talked about PVHVM guests to describe the capability of HVM guests to use PV interfaces, even though PVHVM guests are just HVM guests. The following table gives an overview of marketing terms that were used to describe stages in the evolution of HVM, which you will find occasionally on the Xen wiki and in other documentation:

Compared to PV based virtualization, HVM is generally faster.

A key motivation behind PVH is to combine the best of PV and HVM mode and to simplify the interface between operating systems with Xen Support and the Xen Hypervisor. To do this, we had two options: start with a PV guest and implement a "lightweight" HVM wrapper around it (as we have done for ARM) or start with a HVM guest and remove functionality that is not needed. The first option looked more promising based on our experience with the Xen ARM port, than the second. This is why we started developing an experimental virtualization mode called PVH (now called PVHv1) which was delivered in Xen Project 4.4 and 4.5. Unfortunately, the initial design did not simplify the operating system — hypervisor interface to the degree we hoped: thus, we started a project to evaluate a second option, which was significantly simpler. This led to PVHv2 (which in the early days was also called HVMLite). PVHv2 guests are lightweight HVM guests which use Hardware virtualization support for memory and privileged instructions, PV drivers for I/O and native operating system interfaces for everything else. PVHv2 also does not use QEMU for device emulation, but it can still be used for user-space backends (see PV I/O Support)..

On ARM hosts, there is only one virtualization mode, which does not use QEMU. 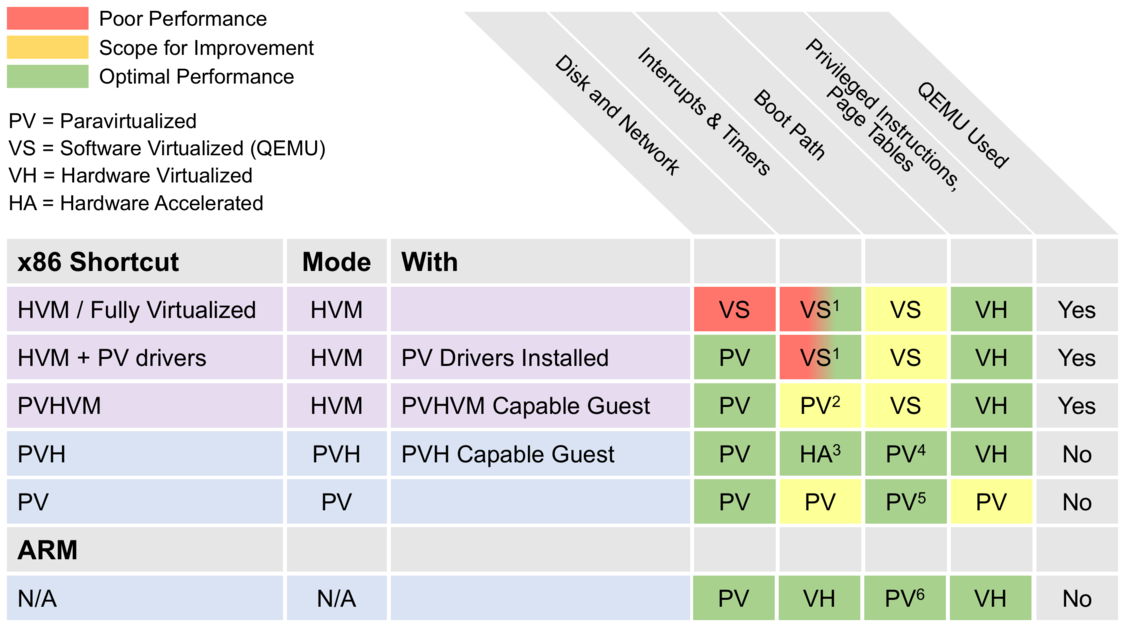 From a users perspective, the virtualization mode primarily has the following effects:

Xen Project software employs a number of different toolstacks. Each toolstack exposes an API, against which a different set of tools or user-interface can be run. The figure below gives a very brief overview of the choices you have, which commercial products use which stack and examples of hosting vendors using specific APIs.

Boxes marked in blue are developed by the Xen Project

The Xen Project software can be run with the default toolstack, with Libvirt and with XAPI. The pairing of the Xen Project hypervisor and XAPI became known as XCP which has been superceded by open source XenServer and XCP-ng. The diagram above shows the various options: all of them have different trade-offs and are optimized for different use-cases. However in general, the more on the right of the picture you are, the more functionality will be on offer.

Which to Choose?
The article Choice of ToolStacks gives you an overview of the various options, with further links to tooling and stacks for a specific API exposed by that toolstack.

For the remainder of this document, we will however assume that you are using the default toolstack with it’s command line tool XL. These are described in the project’s Man Pages. xl has two main parts: