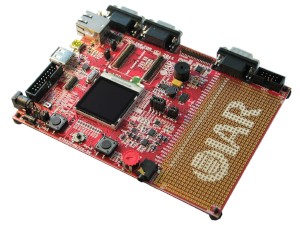 This page documents a FreeRTOS ARM Cortex-M4F demo application that targets an STMicroelectronics STM32F4xx microcontroller. An IAR project is provided that is pre-configured to run on the development board provided as part of the STM32F407ZG-SK starter kit.

Note: The demo presented on this page tests the FreeRTOS floating point support by forcing interrupts that use the floating point unit to nest to a level of three deep. The nesting starts from the tick hook function — which is called from the FreeRTOS tick interrupt code. Removing this part of the test will greatly improve the efficiency of the RTOS kernel, and can be achieved by setting configUSE_TICK_HOOK to zero in FreeRTOSConfig.h.

Note 2: If this project fails to build then it is likely the version of IAR Embedded Workbench being used is too old. If this is the case, then it is also likely that the project file has been (silently) corrupted and will need to be restored to its original state before it can be built even with an updated IAR version.

The IAR Embedded Workbench workspace for the STM32F4xx demo is called RTOSDemo.eww, and is located in the FreeRTOS/Demo/CORTEX_M4F_STM32F407ZG-SK directory of the official FreeRTOS .zip file download.

It creates a lot of queues, a software timer, and different types of semaphore. The tasks consist mainly of the standard demo tasks.

The demo includes application specific "register test" tasks. These are idle priority tasks that start by filling all the generic and floating point registers with known values. The tasks then repeatedly check that each register maintains the value written to it, as it enters and exits the Running state, for the lifetime of the task. Each of the two register check tasks uses a different set of known values, and a value being unexpectedly changed is symptomatic of an error in the context switching mechanism.

A ‘check’ software timer is created and started to periodically inspects the standard demo tasks and register test tasks, to ensure they are all operating as expected, and have never reported an error. The check timer callback function toggles LED STAT4 to give visual feedback of the system status. If LED STAT4 toggles every 3 seconds, then the check software timer has not discovered any problems with the execution of the test and demo tasks. If the rate at which LED STAT4 toggles increases to every 200 milliseconds, then the check software timer has discovered a problem in at least one task.

Building and executing the demo application

This sets the frequency of the RTOS tick interrupt. The supplied value of 1000Hz is useful for testing the RTOS kernel functionality but is faster than most applications require. Lowering this value will improve efficiency.

Attention please!: See the page dedicated to setting interrupt priorities on ARM Cortex-M devices. Remember that ARM Cortex-M cores use numerically low priority numbers to represent HIGH priority interrupts. This can seem counter-intuitive and is easy to forget! If you wish to assign an interrupt a low priority do NOT assign it a priority of 0 (or other low numeric value) as this will result in the interrupt actually having the highest priority in the system — and therefore potentially make your system crash if this priority is above configMAX_SYSCALL_INTERRUPT_PRIORITY. Also, do not leave interrupt priorities unassigned, as by default they will have a priority of 0 and therefore the highest priority possible.

The lowest priority on a ARM Cortex-M core is in fact 255 — however different Cortex-M vendors implement a different number of priority bits and supply library functions that expect priorities to be specified in different ways. For example, on STM32 microcontrollers the lowest priority you can specify is in fact 15 — this is defined by the constant configLIBRARY_LOWEST_INTERRUPT_PRIORITY in FreeRTOSConfig.h. The highest priority that can be assigned is always zero.

Each port #defines ‘BaseType_t’ to equal the most efficient data type for that processor. This port defines BaseType_t to be of type long.

As an example, this demo provides an interrupt service routine called EXTI9_5_IRQHandler(), which is defined in main.c. This interrupt is triggered by pressing the button marked "USER" on the starter kit hardware. The interrupt uses a semaphore to synchronise with a task, and calls portEND_SWITCHING_ISR to ensure the interrupt returns directly to the task. The function is shown below:

Only FreeRTOS API functions that end in "FromISR" can be called from an interrupt service routine — and then only if the priority of the interrupt is less than or equal to that set by the configMAX_SYSCALL_INTERRUPT_PRIORITY configuration constant.