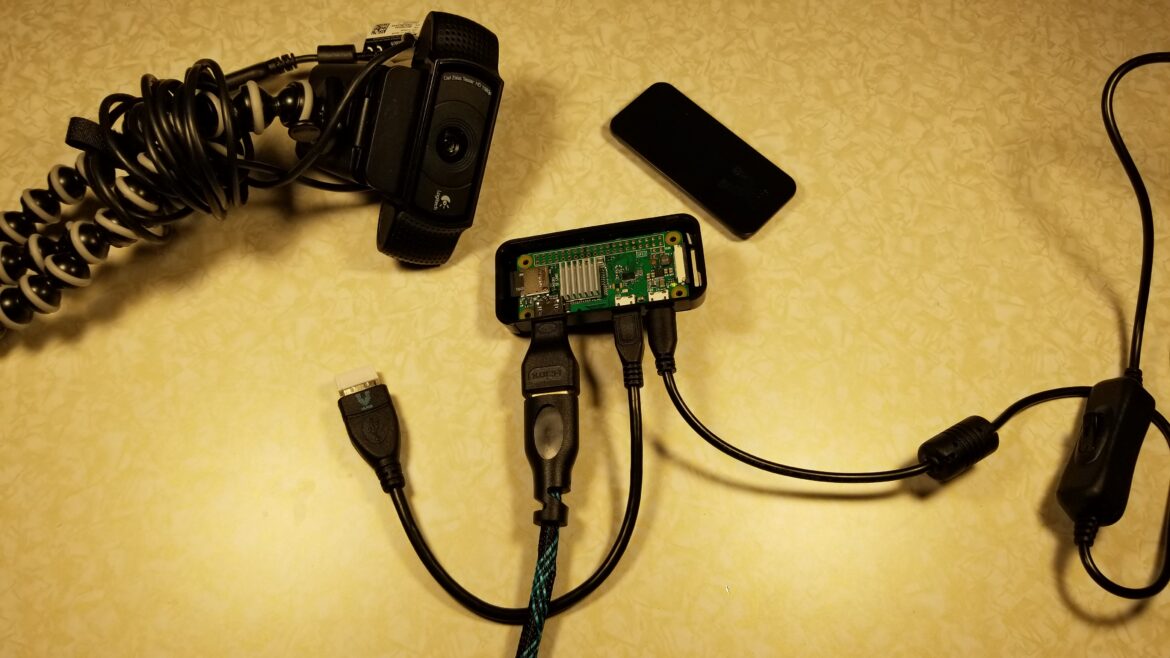 After my recent move, the streaming and &#8216;workshop/den/laboratory&#8217; setup has been a lot of work from the ground up on the computer system side. I used to have a Raspberry PI 4 used as a remote webcam that covered my old place&#8217;s 3D printing area. While that worked, I never liked the idea of dedicating a whole Raspberry Pi 4 to that I wanted to try a Raspberry Pi Zero W and see if it could handle the load. Utilizing the popular MJPG-Streamer package, I was able to get that installed and running, though I had a few hiccups which I&#8217;ll reference at the bottom.

The article is a combination of various articles I found on the web, referencing older versions of one part or another, and this is a reference for my setup should I need to rebuild it.

I&#8217;m utilizing the latest version of Raspbian as of this writing, which was released around February, 2020. Flashing that to a simple 16 GB Micro SD Card for a blank slate: 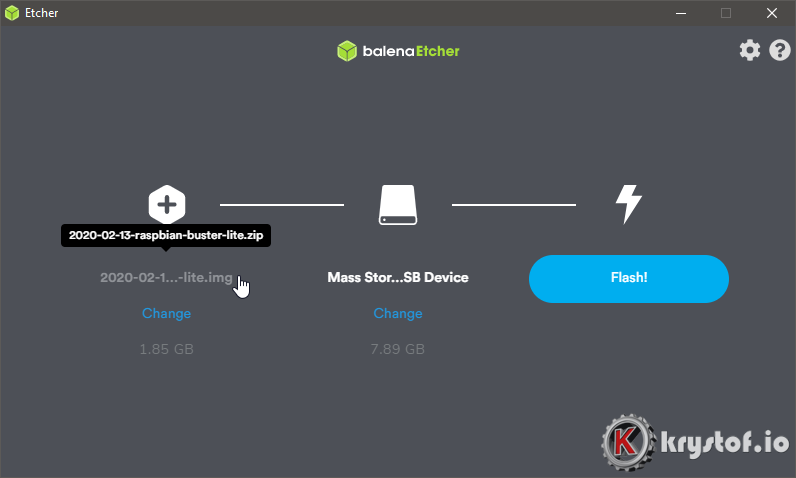 I can now SSH into the Pi Zero W, disconnect the keyboard, and move along with the install.

We need to download some things first before we can build mjpg-streamer. I found some references to articles that pulled from the SVN repo to retrieve and compile, but I ended up getting a large amount of compile errors that look like some library was swapped but the source wasn&#8217;t updated. It&#8217;s the ‘redefinition of ‘struct statx_timestamp’’ error.

We&#8217;ll now install our dependencies before we download and compile mjpg-streamer code:

The make install will copy binaries, libraries and the www pages to the /usr/local/ directory structure:

I&#8217;m going to test the build by plugging in a webcam into the Pi Zero W&#8217;s lone USB port. Executing dmesg shows that it was loaded properly:

Let&#8217;s test by trying to run mjpg-streamer against the input_uvc.so plugin, since I&#8221;m not using a Raspi-Camera, but a USB one instead. (Otherwise I&#8217;d use input_raspicam.so and enabling the camera module in raspi-config). I&#8217;ll also output using the http plugin. So my testing command line looks like this:

Executing that line gives us a dump of data here&#8217;s the relevant info:

Our key variables to tweak are -f for frame rate, and -r for resolution. I&#8217;ll change those later, but for a quick test I head on out to my browser and point it at the www server at http://cam-pi-zero.local:8080/ 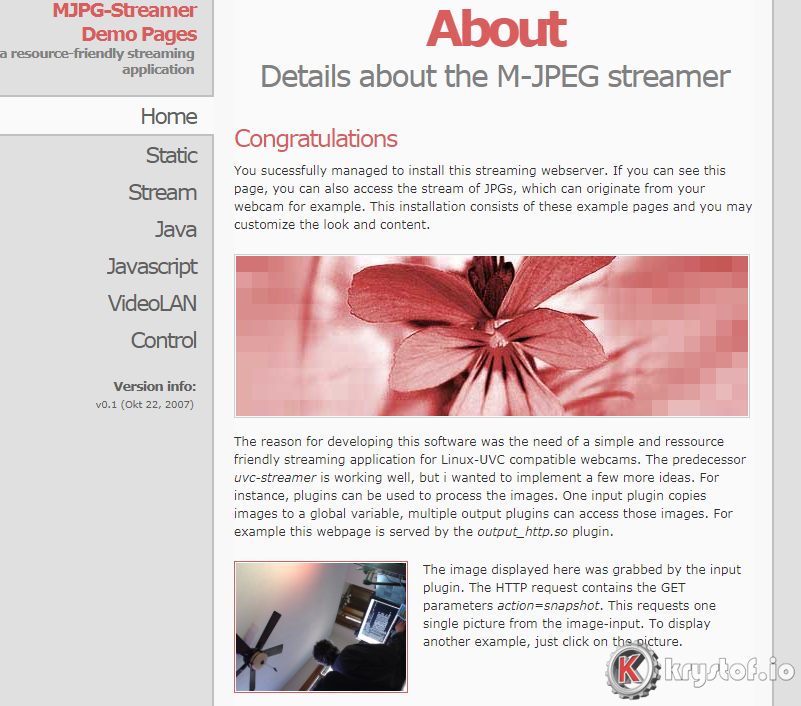 Not only do we see the web interface, but a snapshot of the web cam, which was, clearly, laying down on a workbench behind me while I tried this out.

Validating the stream worked (by clicking &#8216;Stream&#8217;) and turning around, I could see myself moving: 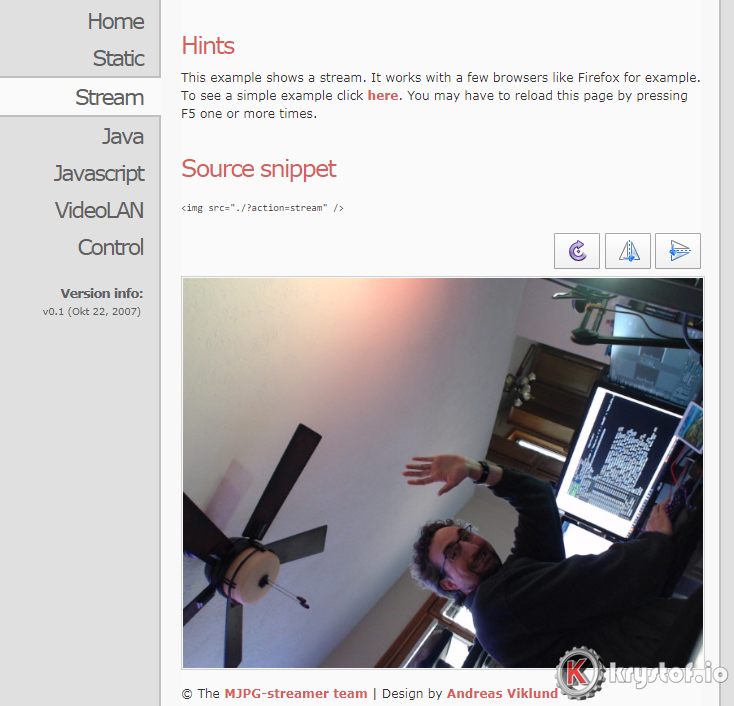 You can now hit CTRL-C in your SSH window (or terminal) and quit the stream. After this point, I could delete the build files I downloaded.

I wanted to run my camera at its intended resolution and at least a frame rate of 30fps. To do that I modified my command line:

I then loaded my own stream up in VLC by opening the direct network path to the stream:

I liked Jacob Salmela&#8216;s script all I did was change it for my command line on the stop and restart section for my resolution and frame-rate. Save the following script by doing a sudo vi:

Then we enable this on startup by performing:

Now you can reboot your pi, or use commands like &#8216;sudo service livestream start&#8217; I rebooted my pi, and my fed was running, and running a status command on my service yields:

Using the Raspberry Pi for video streams is good enough if we&#8217;re looking for low frame rate monitoring without audio. I&#8217;ve yet to find anything that really gives me the frame rate and audio (regardless of latency) that a standard USB webcam directly into my OBS machine would give. Maybe if NDI ever makes it on to the raspberry Pi, or if there is ever SLDP support.

Have you tried streaming across the network on a Raspberry Pi with a USB webcam? Did you fare better than I? Let me know!