This tutorial includes everything you need to know about controlling a character LCD with Arduino. I have included a wiring diagram and many example codes. These displays are great for displaying sensor data or text and they are also fairly cheap.

The first part of this article covers the basics of displaying text and numbers. In the second half, I will go into more detail on how to display custom characters and how you can use the other functions of the LiquidCrystal Arduino library. 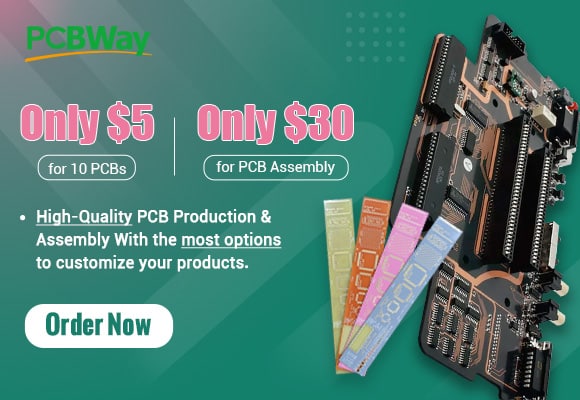 Makerguides.com is a participant in the Amazon Services LLC Associates Program, an affiliate advertising program designed to provide a means for sites to earn advertising fees by advertising and linking to products on Amazon.com.

These LCDs are available in many different sizes (16×2 1602, 20×4 2004, 16×1 etc.), but they all use the same HD44780 parallel interface LCD controller chip from Hitachi. This means you can easily swap them. You will only need to change the size specifications in your Arduino code.

The LCD has 16 connection pins, numbered 1-16 from left to right.

The pinout of a standard HD44780 LCD is given in the table below:

Testing the LCD and adjusting contrast

In order to test the display, you will need to make the connections as shown in the figure below.

Most LCDs have a built-in series resistor for the LED backlight. You should find it on the back of the LCD connected to pin 15 (Anode). If your display doesn’t include a resistor, you will need to add one between 5 V and pin 15. It should be safe to use a 220Ω resistor, but this value might make your display a bit dim. You can check the datasheet for the maximum current rating of the backlight and use this to select an appropriate resistor value.

After you have wired up the LCD, you will need to adjust the contrast of the display. This is done by turning the 10 kΩ potentiometer clockwise or counterclockwise.

Plug in the USB connector of the Arduino to power the LCD. You should see the backlight light up. Now rotate the potentiometer until one (16×2 LCD) or 2 rows (20×4 LCD) of rectangles appear.

You can tweak the contrast later if needed.

How to connect the LCD to Arduino UNO

In order to control the LCD and display characters, you will need to add a few extra connections. Check the wiring diagram below and the pinout table from the introduction of this article.

We will be using the LCD in 4-bit mode, this means you don’t need to connect anything to D0-D3. The R/W pin is connected to ground, this will pull the pin LOW and set the LCD to WRITE mode.

Once you have wired everything, we can start programming the LCD.

To control the LCD we will be using the LiquidCrystal library. This library should come pre-installed with the Arduino IDE. You can find it by going to Sketch Include Library LiquidCrystal.

The example code below shows you how to display a message on the LCD. Next, I will show you how the code works and how you can use the other functions of the LiquidCrystal library.

You should see the following output on the LCD:

How the code works

After including the library, the next step is to create a new instance of the LiquidCrystal class. The is done with the function LiquidCrystal(rs, enable, d4, d5, d6, d7) . As parameters we use the Arduino pins to which we connected the display. Note that we have called the display ‘lcd’. You can give it a different name if you want like ‘menu_display’. You will need to change ‘lcd’ to the new name in the rest of the sketch.

In the setup() the LCD is initiated with the function begin(cols,rows) . When using a 20×4 LCD change this line to lcd.begin(20,4);

In the loop() the cursor is set to the third column and first row of the LCD with lcd.setCursor(2,0) . Note that counting starts at 0, and the first argument specifies the column. If you do not specify the cursor position, the text will be printed at the default home position (0,0) if the display is empty, or behind the last printed character.

Next, the string ‘Hello World!’ is printed with lcd.print(&#34;Hello World!&#34;) . Note that you need to place quotation marks (” “) around the text. When you want to print numbers or variables, no quotation marks are necessary.

If you want to see an example for displaying (changing) variables on the LCD, check out my tutorial for the HC-SR04 ultrasonic distance sensor:

In the example I used an I2C LCD display but the code after the setup is the same for both.

Other functions of the LiquidCrystal library

The LiquidCrystal Arduino library has many other built-in functions which you might find useful. You can find an overview of them below with explanation and some code snippets.

Clears the LCD screen and positions the cursor in the upper-left corner (first row and first column) of the display. You can use this function to display different words in a loop.

Positions the cursor in the top-left corner of the LCD. Use clear() if you also want to clear the display.

Displays the LCD cursor: an underscore (line) at the position of the next character to be printed.

Hides the LCD cursor. The following example creates a blinking cursor at the end of “cursor()”.

Creates a blinking block style LCD cursor: a blinking rectangle at the position of the next character to be printed.

Disables the block style LCD cursor. The following example displays the blinking cursor for 5 seconds and then disables it for 2 seconds.

This function turns on the LCD screen and displays any text or cursors that have been printed to the display.

This function turns off any text or cursors printed to the LCD. The text/data is not cleared from the LCD memory. This means it will be shown again when the function display() is called.

This function can be used to write a character to the LCD. See the section about creating and displaying custom characters below for more info.

Scrolls the contents of the display (text and cursor) one space to the left. You can use this function in the loop section of the code in combination with delay(500), to create a scrolling text animation.

Scrolls the contents of the display (text and cursor) one space to the right.

The following example sketch enables automatic scrolling and prints the character 0 to 9 at the position (16,0) of the LCD. Change this to (20,0) for a 20×4 LCD.

Turns off automatic scrolling of the LCD.

This function causes text to flow to the right from the cursor, as if the display is left-justified (default).

This function causes text to flow to the left from the cursor, as if the display is right-justified.

How to create and display custom characters?

With the function createChar() it is possible to create and display custom characters on the LCD. This is especially useful if you want to display a character that is not part of the standard ASCII character set.

Technical info: LCDs that are based on the Hitachi HD44780 LCD controller have two types of memories: CGROM and CGRAM (Character Generator ROM and RAM). CGROM generates all the 5 x 8 dot character patterns from the standard 8-bit character codes. CGRAM can generate user-defined character patterns.

For 5 x 8 dot displays, CGRAM can write up to 8 custom characters and for 5 x 10 dot displays 4. For more info see the datasheet.

You should see the following output on the LCD:

How the code works

After including the library and creating the LCD object, the custom character arrays are defined. Each array consists of 8 bytes, 1 byte for each row. In this example 8 custom characters are created.

When looking closely at the array, you will see the following. Each row consists of 5 numbers corresponding to the 5 pixels in a 5 x 8 dot character. A 0 means pixel off and a 1 means pixel on.

It is possible to edit each row by hand, but I recommend using this visual tool on GitHub. This application automatically creates the character array and you can click on the pixels to turn them on or off.

In the setup() , the custom characters are created with lcd.createChar(num, data) .

The first argument in this function is the number of the custom character (0-7) and the second argument is the character array that we created.

In the loop() all the characters are displayed with lcd.write() . As a parameter we use the number of the character we reserved.

In this article I have shown you how to use an alphanumeric LCD with Arduino. I hope you found it useful and informative. If you did, please share it with a friend that also likes electronics and making things!

I would love to know what projects you plan on building (or have already built) with these LCDs. If you have any questions, suggestions, or if you think that things are missing in this tutorial, please leave a comment down below.